Researchers supported by CPFT and the NIHR Applied Research Collaboration East of England have published findings from a study reviewing advance prescribing of injectable medications for end of life care in the community.

The practice of advance prescribing of injectable medications is recommended for patients approaching the end of life at home in the UK and elsewhere. The medications, which usually include opioids, can be prescribed weeks to months before death. They are prescribed in advance so visiting health professionals can administer them if the patient needs them to ease symptoms like pain and agitation in the last days of life.

PhD student and Queen's Nurse Ben Bowers led the research with the University of Cambridge Primary Care Unit. They reported that advance prescriptions vary in frequency, depending on which GP practice patients are registered with and what conditions they have.

Lead author Ben Bowers (pictured) said: "Thank you to CPFT colleagues who supported this research and facilitated access to records on community prescribing practice. Our study is the first to highlight the high frequency and standardised prescribing of anticipatory medication prescriptions for terminally ill patients in a primary care population. The range of timing of prescribing, at times many months before death, emphasises that it is difficult to predict the timing of death."

"Our findings also highlight the risks involved in putting medication in place too far in advance of possible need. The presence of anticipatory medications for long periods of time, or when situations are uncertain, may compromise patient safety unless robust systems are in place to review their continued appropriateness and safe use.”

The research team reviewed GP records and community nurse records of 329 deceased patients registered with 11 GP practices. The patients received end-of-life care at home or in their care home between 2017 and 2019, and died from predictable causes like heart failure, cancer and pneumonia.

The records revealed that half the patients in the study were prescribed anticipatory medications, often in the form of standardised drugs and doses for the five most common symptoms that frequently occur towards the end of life: pain, breathlessness, nausea and vomiting, agitation or respiratory secretions.

Statistical analysis of the data in the clinical records of the 329 patients showed big variations in prescribing rates, depending on the GP practice they were registered with, as well as the condition they had. GP practice rates varied from 23% of patients receiving advance prescriptions in one of the practices to 93% in another. The median rate across the 11 practices was 47%.

Nearly 70% of patients with cancer were given advance prescriptions, compared with 39% of non-cancer patients. The likelihood of prescribing was significantly higher for patients who had expressed a preferred place of death or had the involvement of a specialist palliative care team. 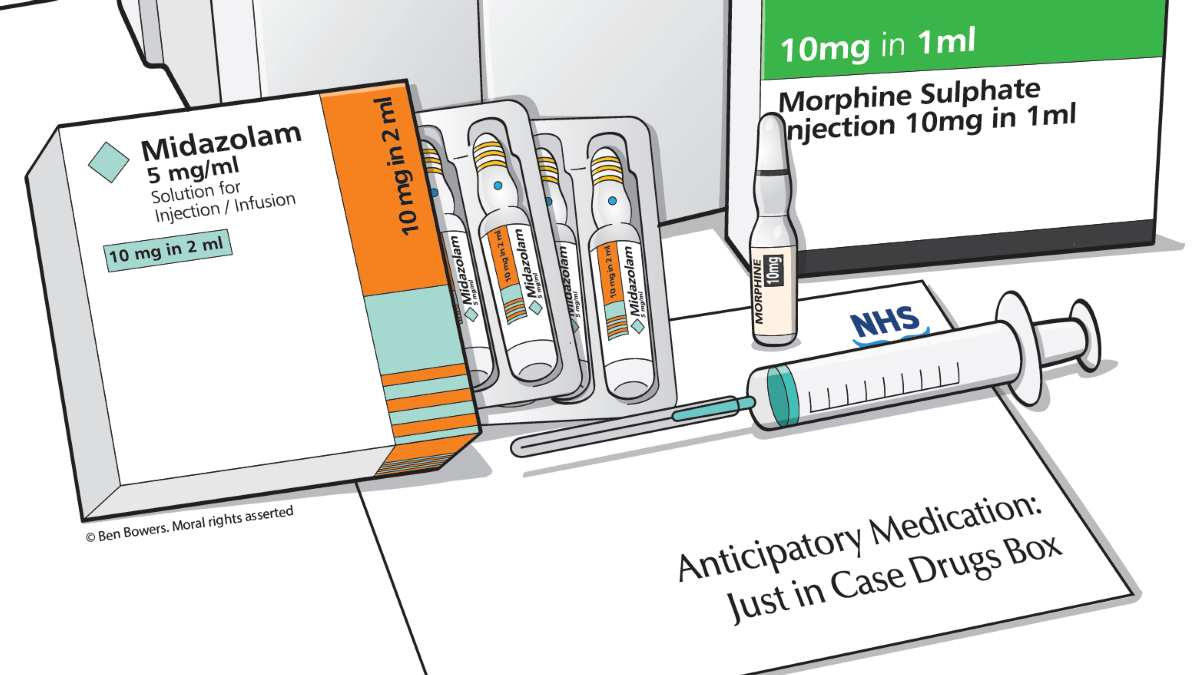 The clinical records showed that the anticipatory medications were frequently recorded as being prescribed as part of a single end of life planning consultation. Often, the prescription (or discussion concerning the prescription) occurred during the same consultation with the patient and their family when preferred place of death and / or cardiopulmonary resuscitation discussions were first recorded.

The researchers were funded by the National Institute for Health Research (NIHR) School for Primary Care Research and the NIHR Applied Research Collaboration East of England (ARC EoE) programme, with a contribution from the RCN Foundation Professional Bursary Scheme.

Podcast
Listen to Ben Bowers explaining the research and recommendations.